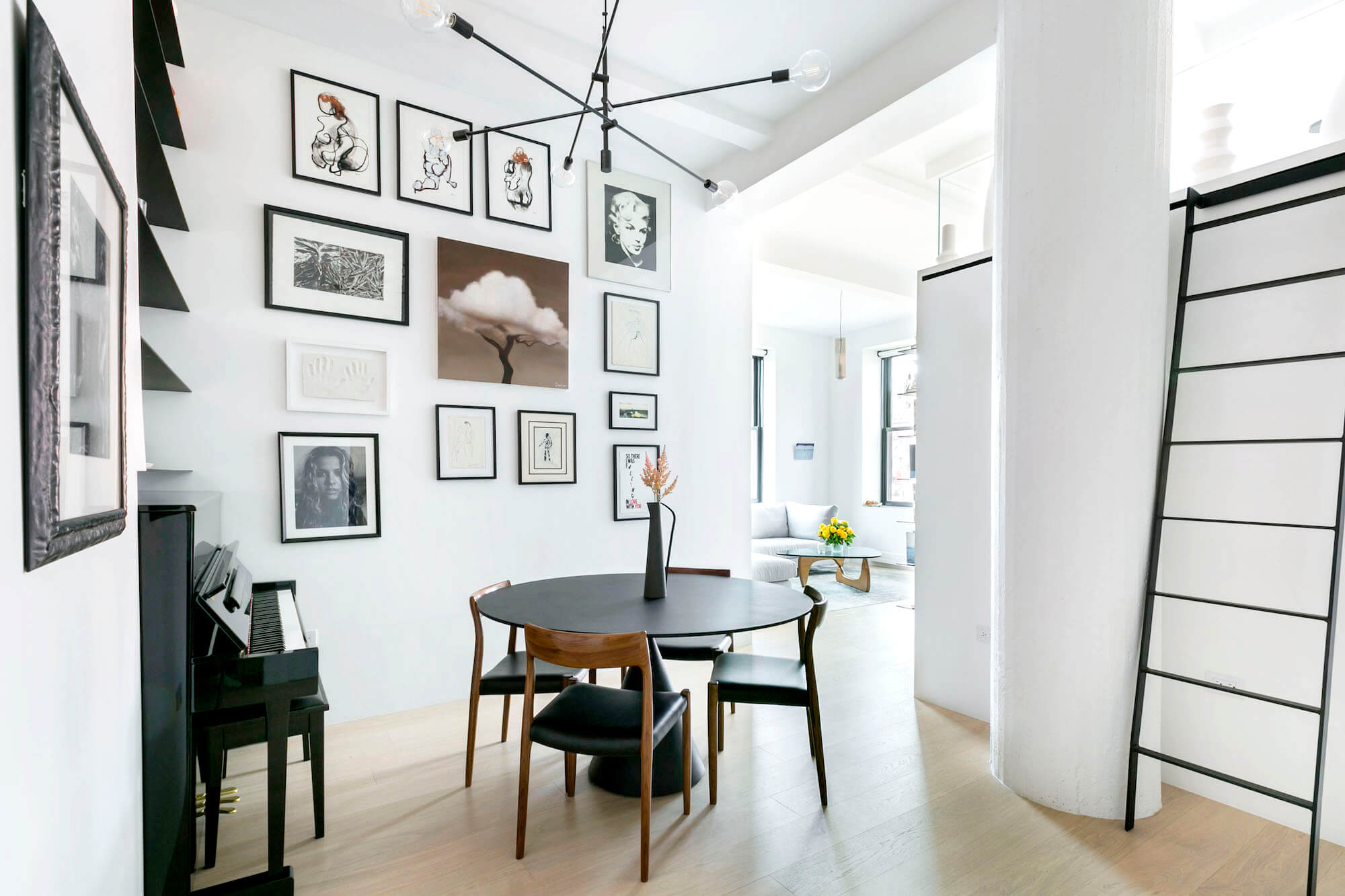 Above) “After” photos by Kate Glicksberg for Sweeten

Laying out the plan for high ceilings

The homeowners closed on an 850-square-foot loft apartment in a multi-building complex in Greenwich Village, just a short stroll from Washington Square Park. The building dated to 1890 and had formerly housed a cast-iron factory. The apartment itself benefited from the structure’s history with high 16-foot ceilings and original detailing. The interior finishes were outdated, however, since it had been decades since any renovations had been done to the apartment. 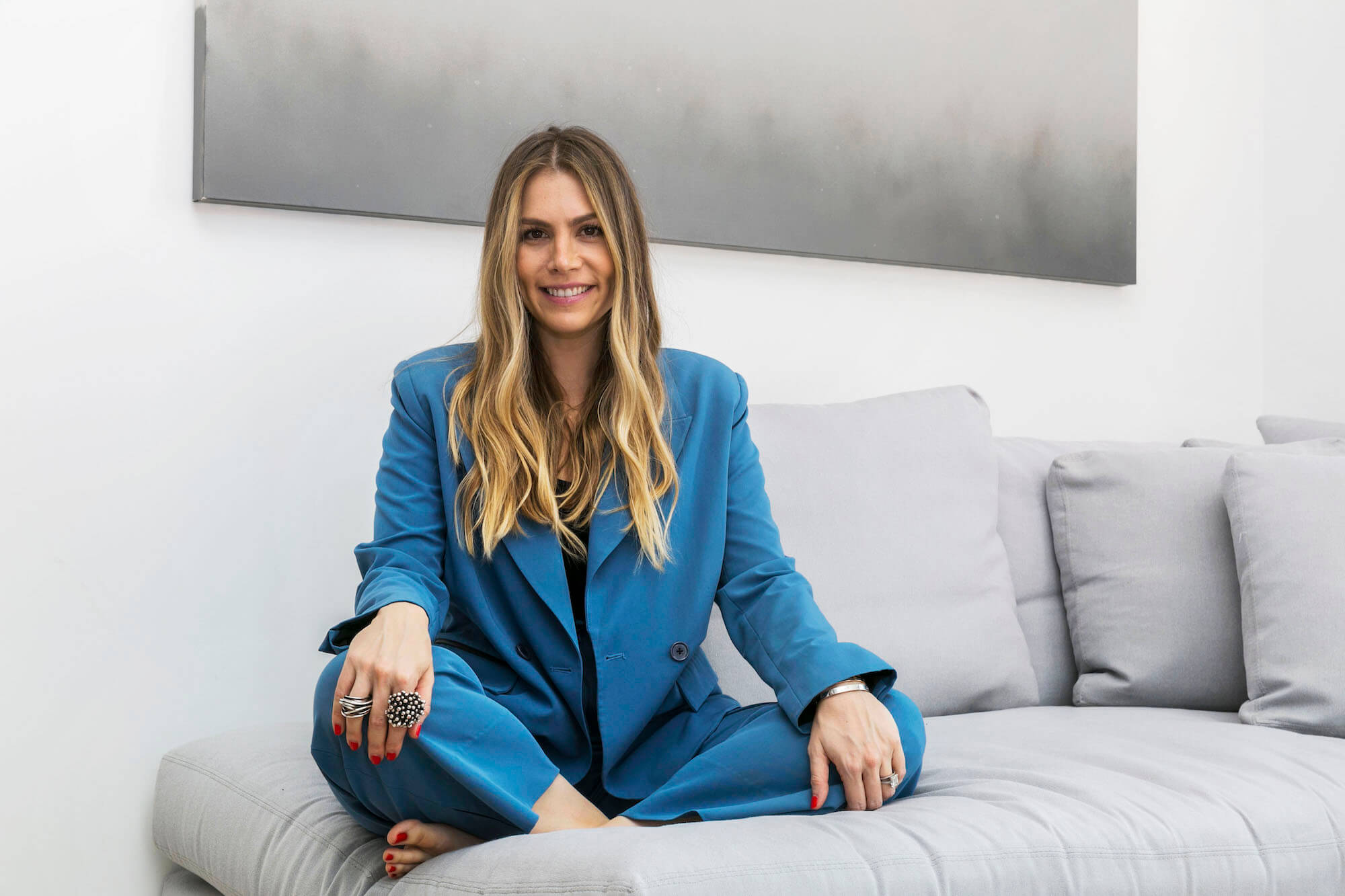 They planned to convert the one-bedroom apartment into a two-bedroom while making full use of the ceiling height. A mezzanine level around much of the apartment would allow for storage and display of their art and decorative pieces.

The kitchen was tucked away in a dark corner of the loft, with dark wood cabinetry and black countertops, which did nothing to brighten the room. It made more sense to swap the locations of the bathroom and the kitchen. The kitchen was now closer to the core of the home—the dining and living spaces. The bathroom itself was sorely in need of a gut—it featured finishes and materials that were far past their prime. It was also critical to replace its electrical and plumbing. 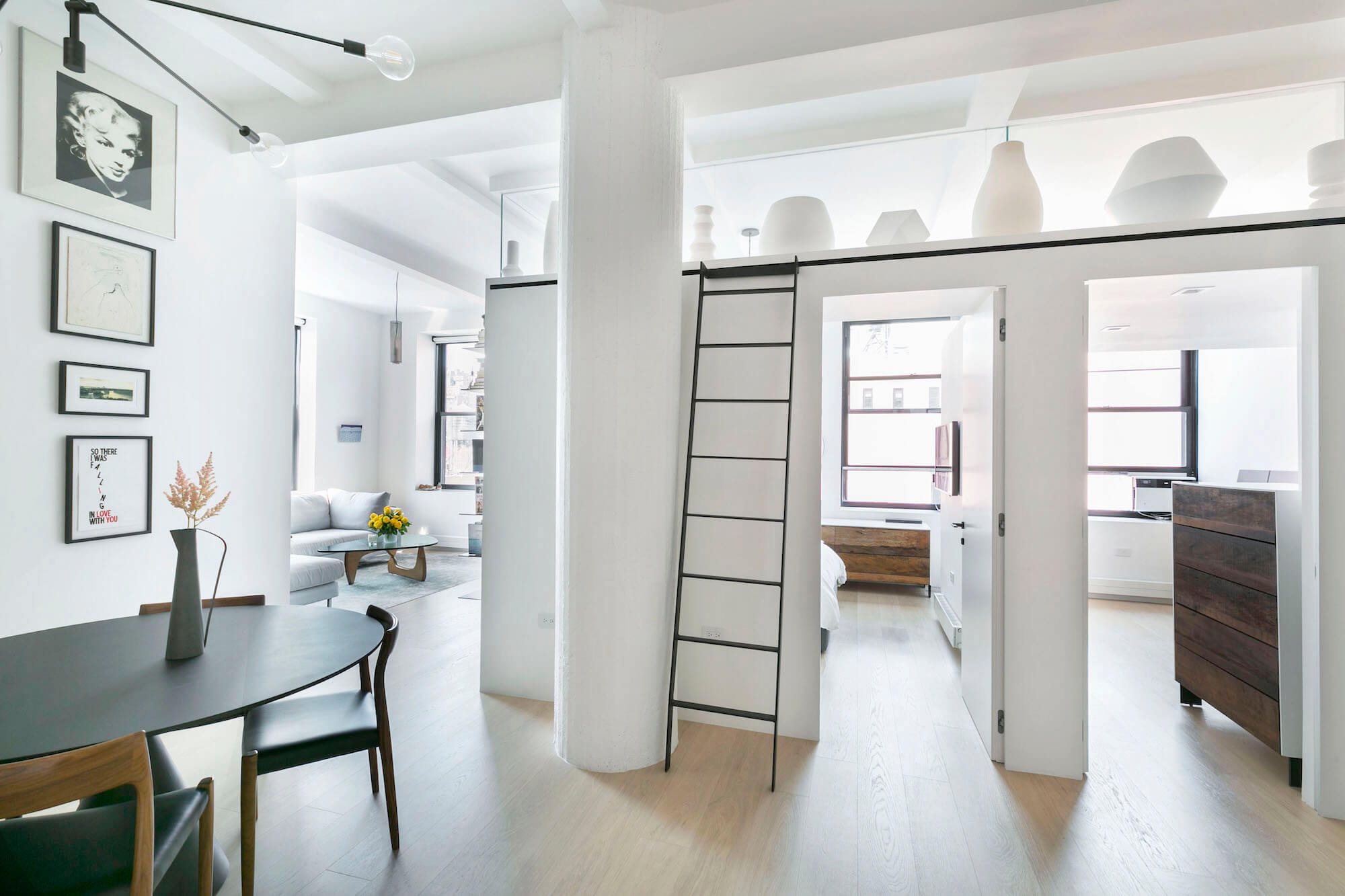 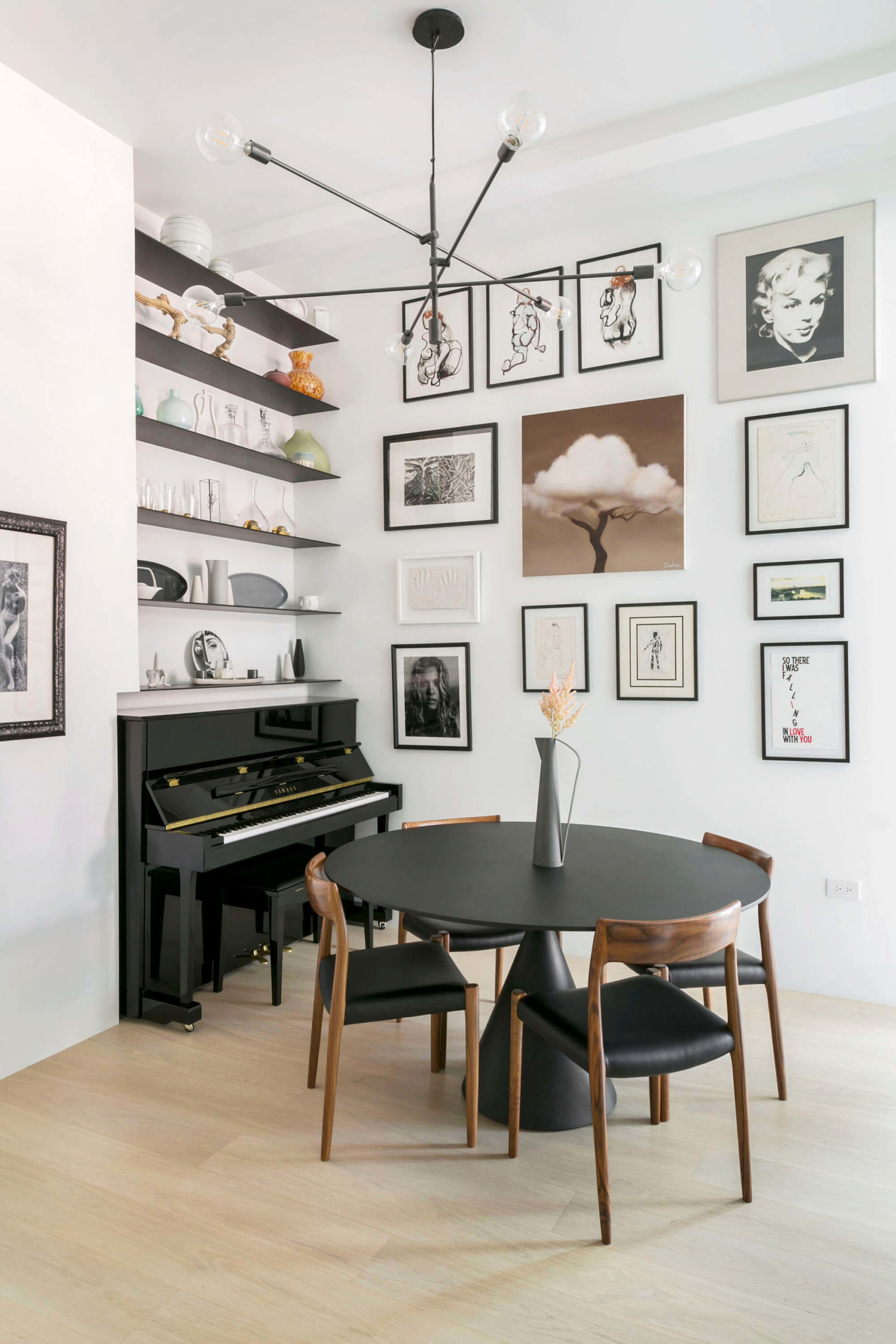 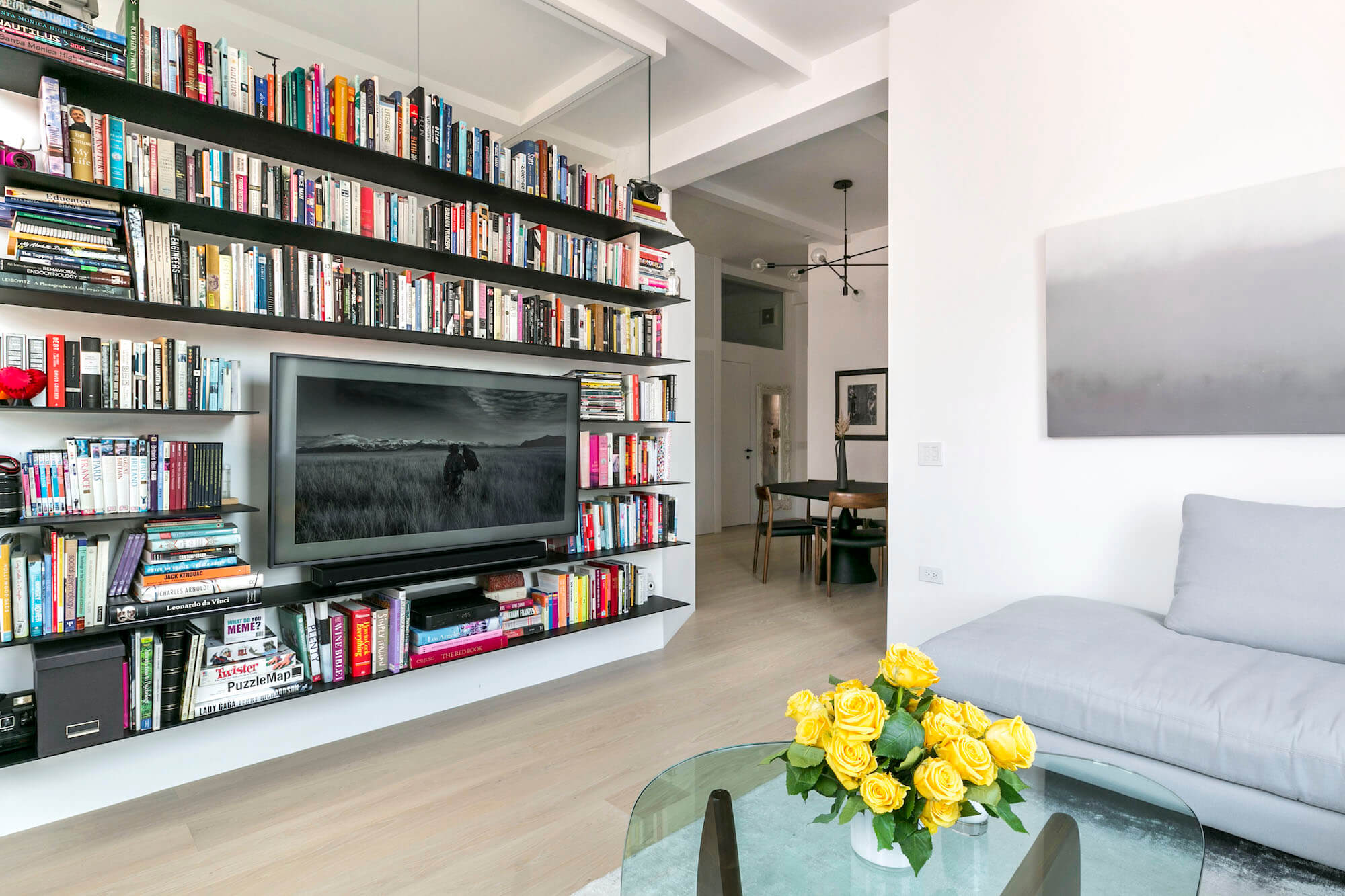 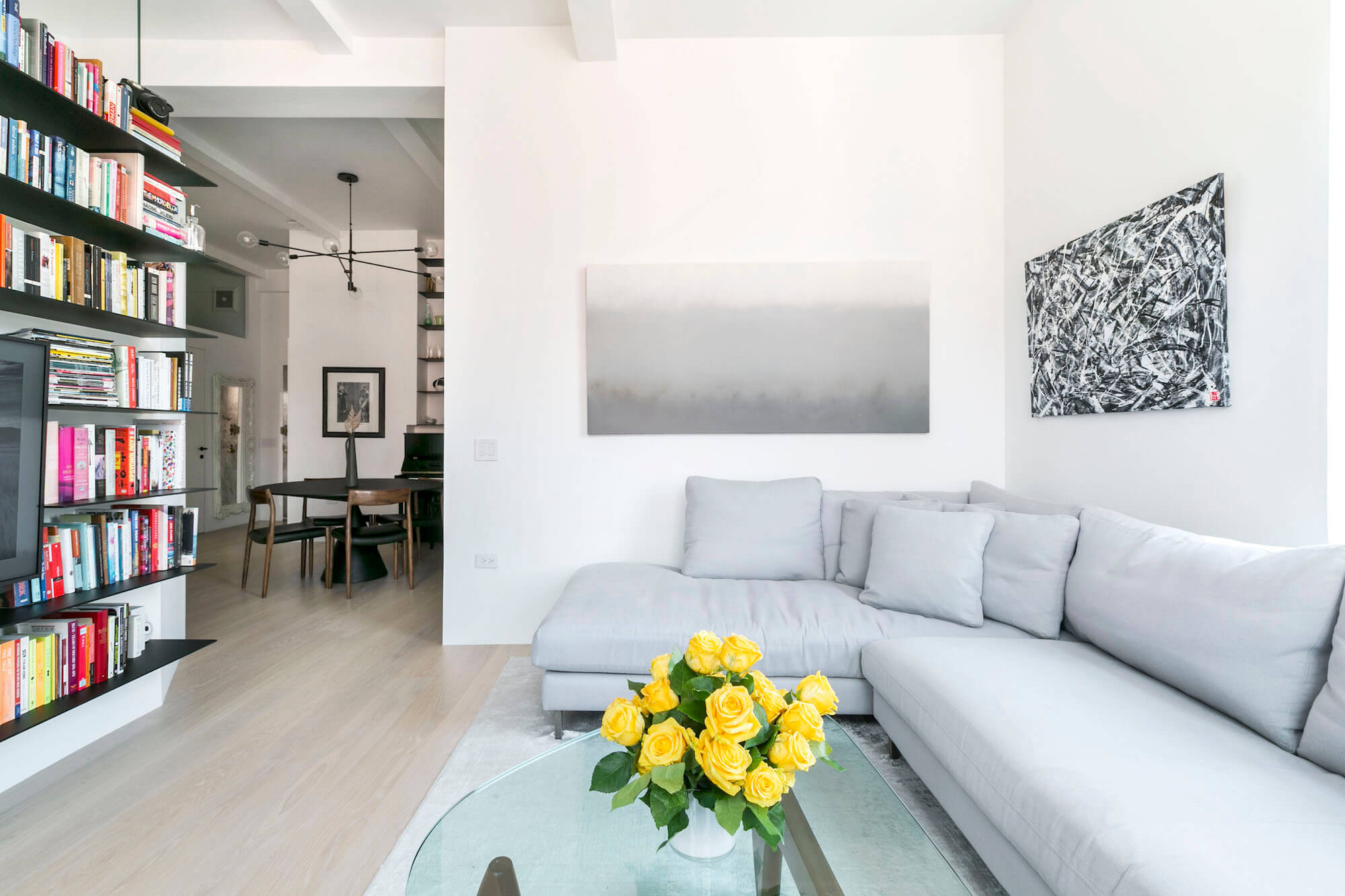 As their Sweeten contractor began to demo the space, he unearthed…well, earth! The contractor found about eight inches of “some kind of dirt floor” beneath the flooring. It would be excavated and removed along with the rest of the demolition debris. (That was a first for this seasoned contractor. He speculated it was perhaps due to the building’s past as a factory.)

Out with the old, and in with a new, gallery-like space that featured bright white walls, highlighted with blackened steel accents throughout the space. Keeping the finishes simple allowed the airy space to shine. 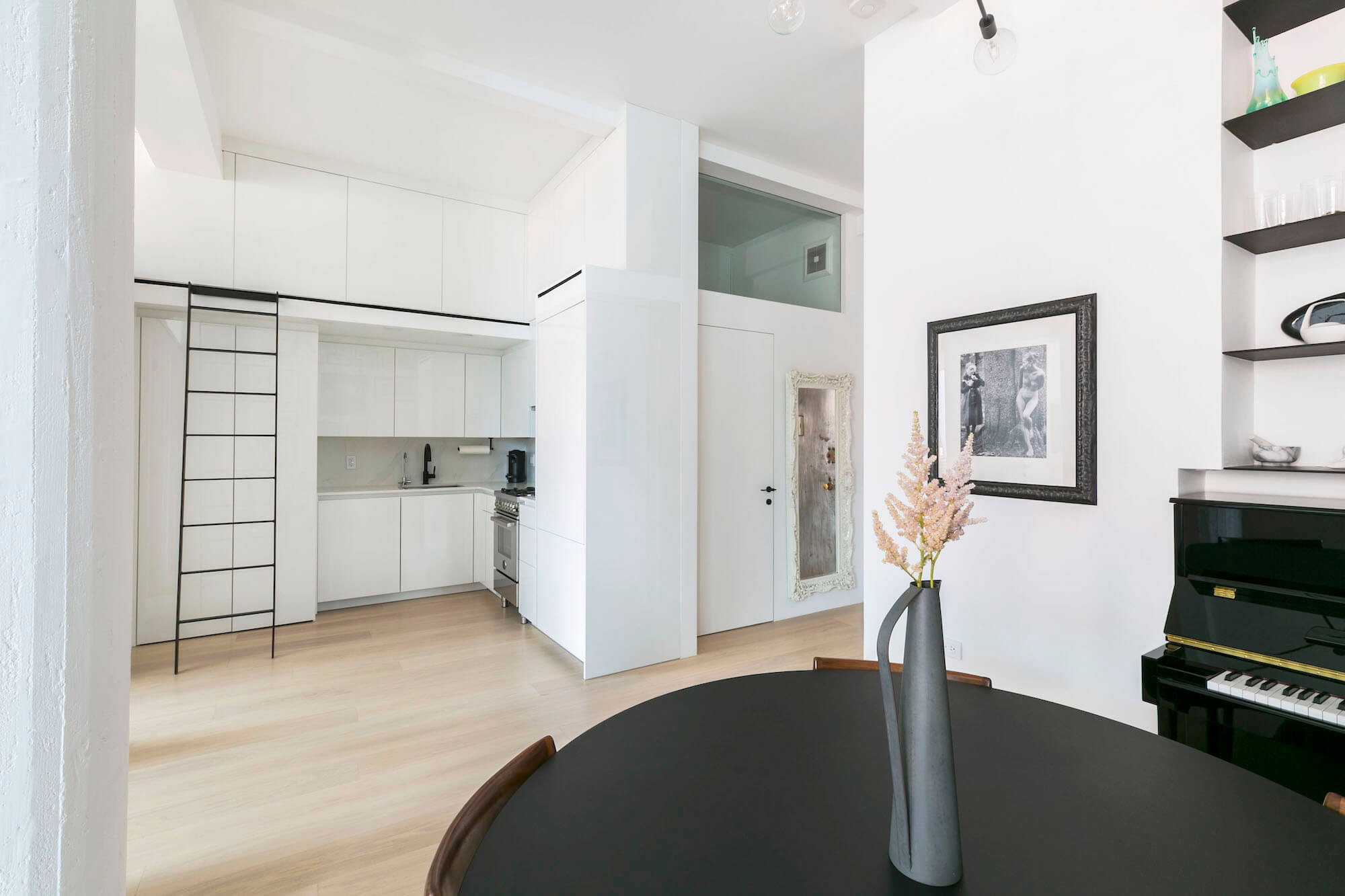 Although there are now two bedrooms rather than one, the homeowners were able to preserve a sense of expansiveness by not taking the walls all the way up to the ceiling. Clear glass transom panels were installed in the bedrooms, as well as in the bathroom so that natural light could still shine in each part of the loft.

Throughout the hallways, bedroom, kitchen, and bathroom, a steel rail was installed so that a custom library ladder could be used to access the mezzanine areas. This unique system used brushed steel for the stationary components. The portable ladder, however, was made of aluminum so that it would be lighter for the homeowners to move around the apartment.

While the living room lost a few feet to create the second bedroom, it gained plenty of linear feet in book storage. Custom black steel bookcases run along the length of one wall. The contractor secured these shelves through to the studs as they were rebuilding the apartment, so it’ll easily hold whatever the homeowners decide to put on it!

The living room space opens up to the dining nook, which also houses an upright piano. An adjacent gallery wall, decorated with black-framed art and photography, provides visual interest along the interior wall. Recessed lighting and statement pendants support the minimalist aesthetic. 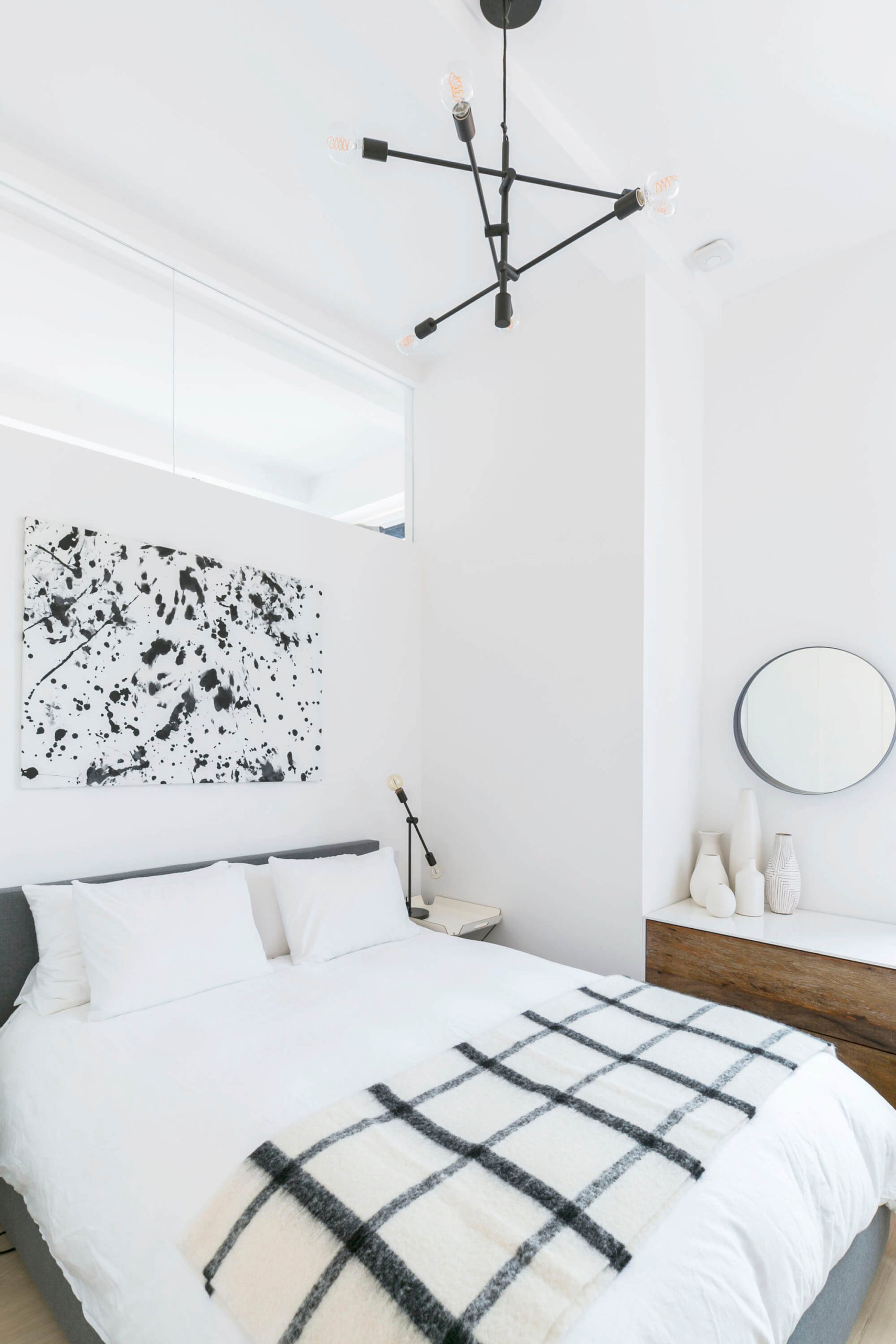 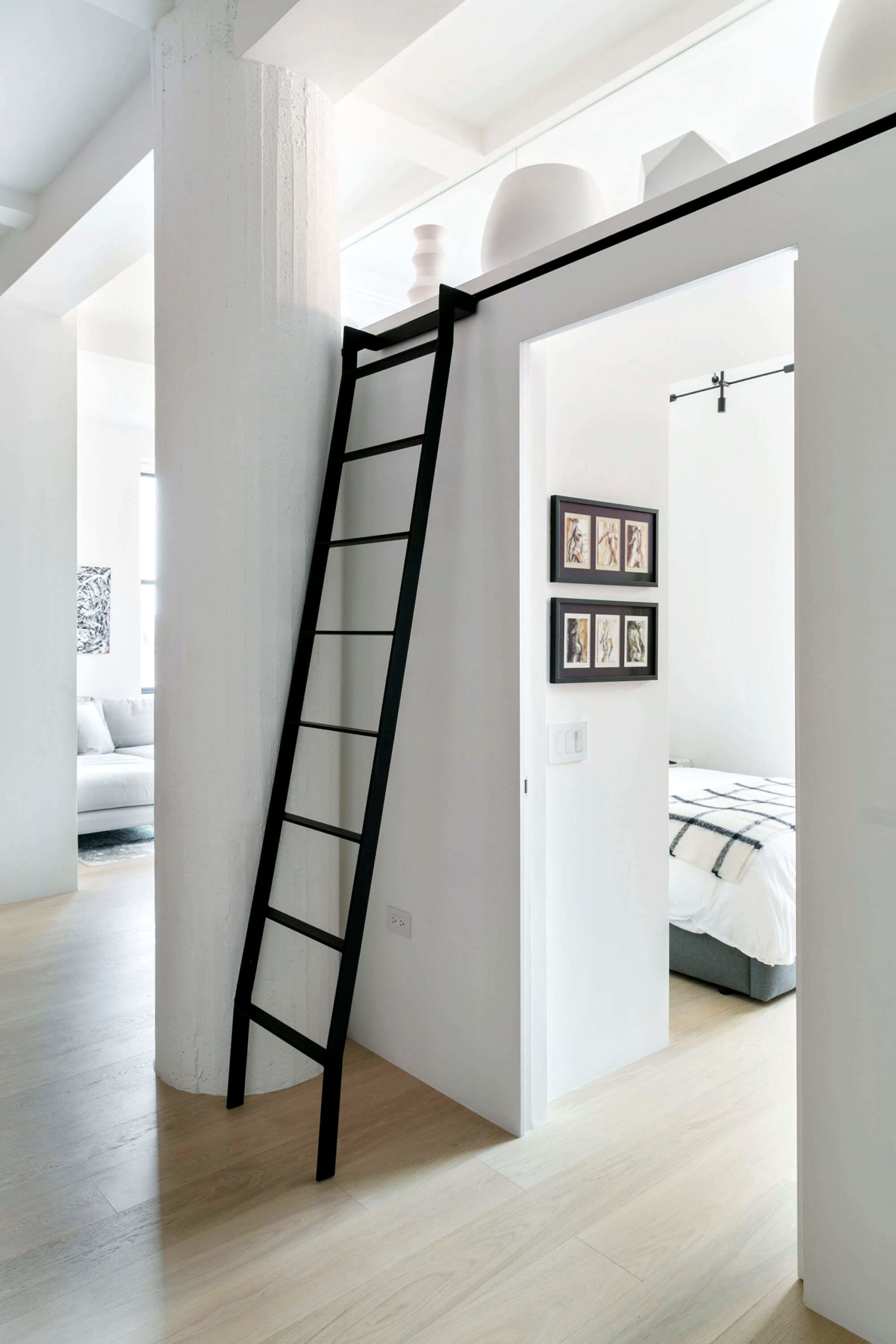 Extra storage for the bathroom

In the smaller bedroom next to the kitchen, they created a lofted sleeping area for guests with a simple mattress set-up, which is also accessible via the library ladder. The elevated sleeping loft allows the floor area of the room to be used by the homeowners as a closet and dressing area. 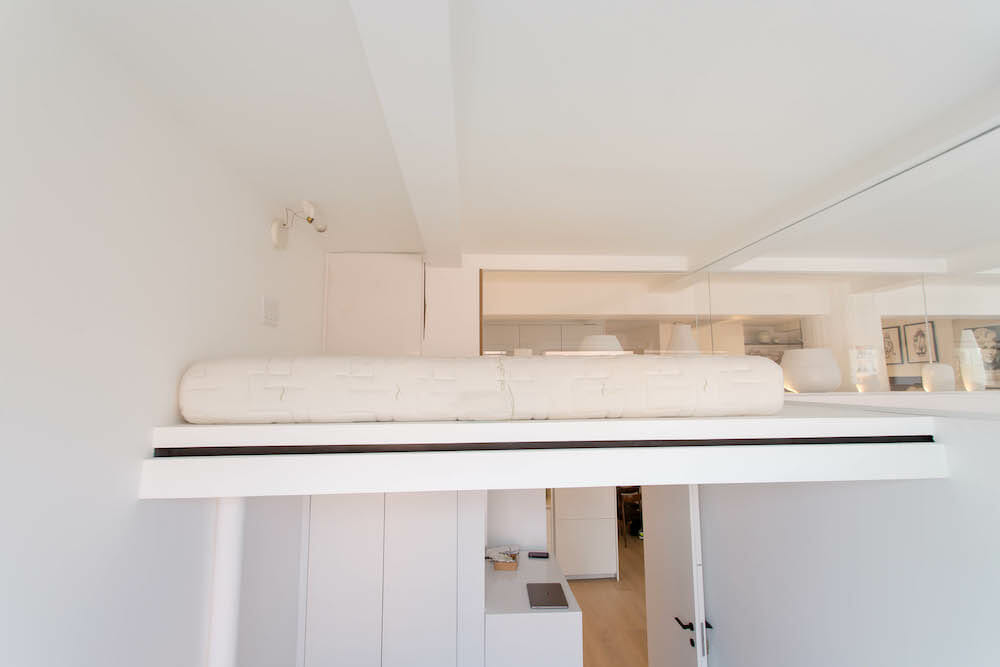 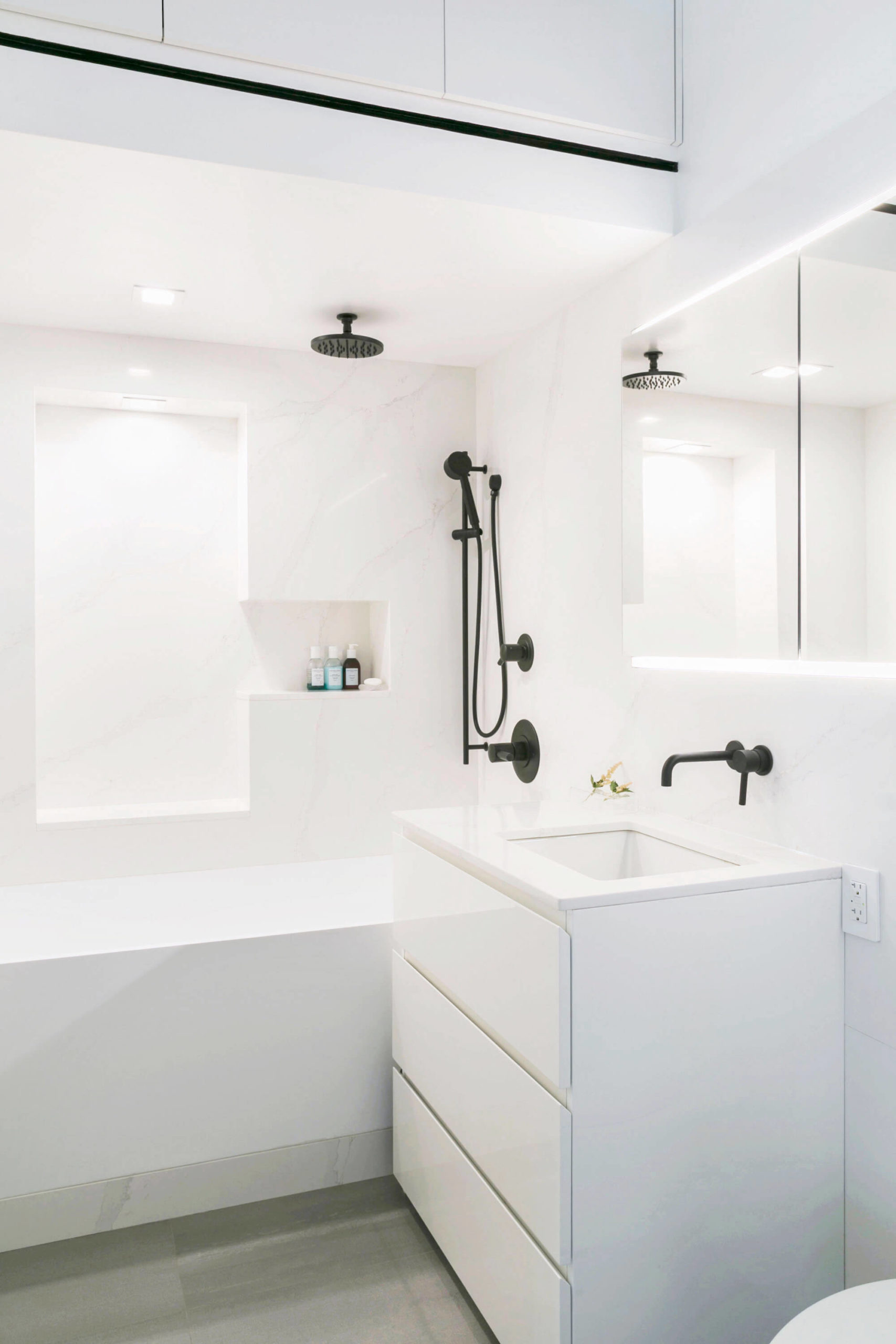 The bathroom received a similarly modern treatment with a deep soaking tub. Shower and sink fixtures, as well as a towel hook in black matte, provide sharp contrast. Unusually, the homeowners were able to add storage above the shower area, also accessible with the portable library ladder. As with the overhead kitchen storage, the space above was not compartmentalized so that it could accommodate large or unwieldy objects that would not fit on regular shelves.

Although the homeowners were eager to get into the new loft, the wait was well worth it! They now have a beautiful home that accommodates and showcases all their art and treasures, plus a guest room to boot!

Thank you for sharing your loft renovation—and gorgeous high ceilings—with us!

ADUs or accessory dwelling units can transform into home offices, living space for family or as a rental, or a retreat.

Sweeten handpicks the best general contractors to match each project’s location, budget, scope, and style. Follow the blog, Sweeten Stories, for renovation ideas and inspiration and when you’re ready to renovate, start your renovation with Sweeten

Did you miss our previous article…
https://www.tampa-bay-homes-guide.com/?p=1089