A Hodgepodge of DIY Jobs Gets a Makeover 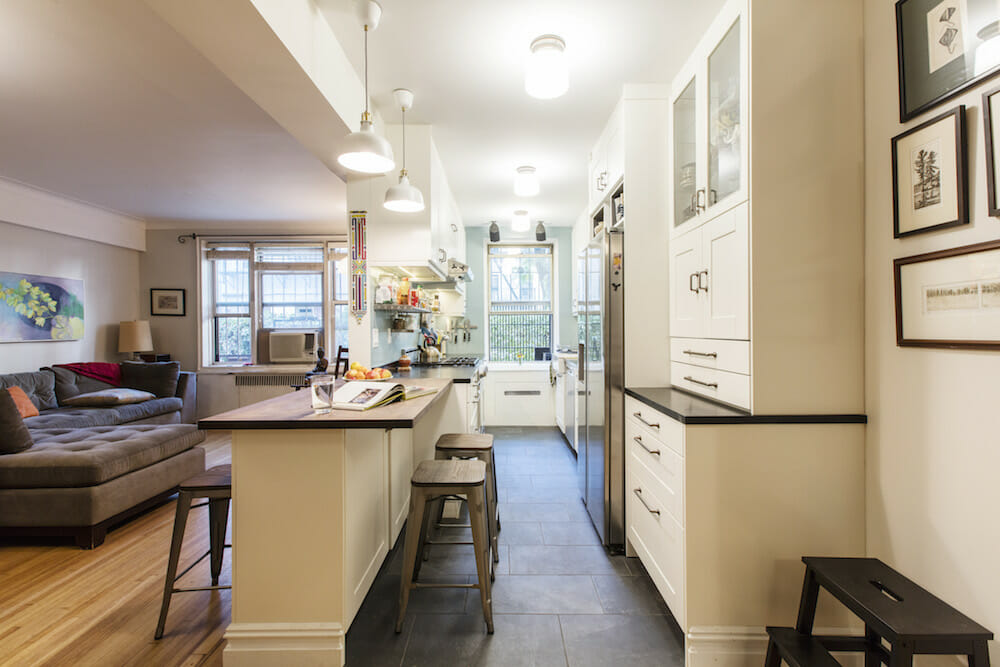 Wear-and-tear of a well-used kitchen shows

In the 23 years since Susan and Carl bought a one-bedroom East Village co-op, they’ve made a lot of changes. “The history is long in this space,” said Susan, including withstanding 16 years of kids and dogs. She isn’t exaggerating. This couple bought the neighboring studio apartment in 1997, bumping up their square footage to 1,400. They hired someone to do the bare minimum to connect the two apartments and did everything else themselves. A few years later, while an “inept” contractor did a poor job of fixing up the bathroom, the couple went on to do a DIY job with the kitchen. A leaky dishwasher eventually ruined the flooring.

With low interest rates, they decided to refinance their mortgage and renovate, which brings this story to the present day. Despite those DIY fixes, the kitchen wasn’t at its full potential. A dropped ceiling in certain areas eliminated what could be very useful storage space. The recessed canned lights hanging from the ceiling also made the kitchen feel small. Even with a cutout in the wall toward the living room, the layout didn’t suit entertaining. “Whenever we had company,” said Susan, “everyone would squeeze into the end of the kitchen while I cooked and doled out snacks.”

Finding the right expertise to get the job done

With the disaster of the bathroom contractor etched in their minds, Susan and Carl promised themselves to scrutinize the next person they worked with. They found Sweeten and posted their project, a choice that paid off many times over. For example, they discovered a beam that they feared would force them to shorten the cabinets and give up storage space. But the Sweeten contractor they chose “knew exactly how to notch out the back of the taller cabinets to accommodate the beam,” said Susan. 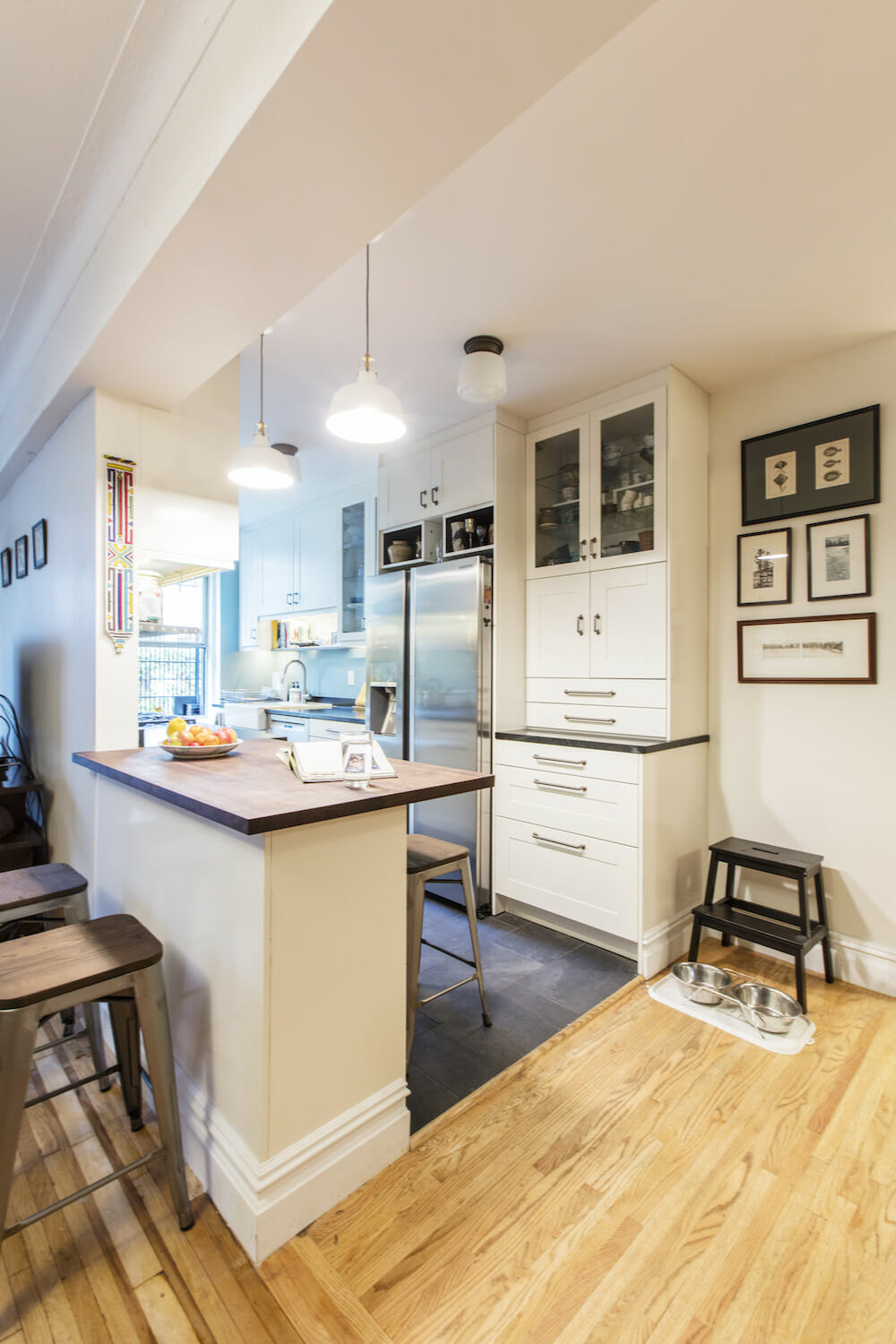 The couple spent hours on Pinterest and decided against uniformity in the long, narrow space, opting for family- and pet-friendly materials and layout instead. “We wanted to eliminate the bowling alley feel,” she said. This was achieved by mixing cabinets and shelves, as well as glass and solid doors, and horizontal and vertical lines. Moving the window gate from the inside to outside was another simple fix that made a big difference. That change now enables them to open the bottom half of the gate. They opted for a painted backsplash rather than tile. “It leaves open the possibility of changing colors when you get tired of it,” she said.

The job went smoothly with no issues with her contractor—even though the “construction dust was hard to live with”—the couple still has tips for other renovators: 1. Triple your timeline estimate to get a realistic sense of how long a renovation will take, and 2. When your kitchen is out of order, there’s a lot you can do in a slow cooker and rice cooker, including pasta! 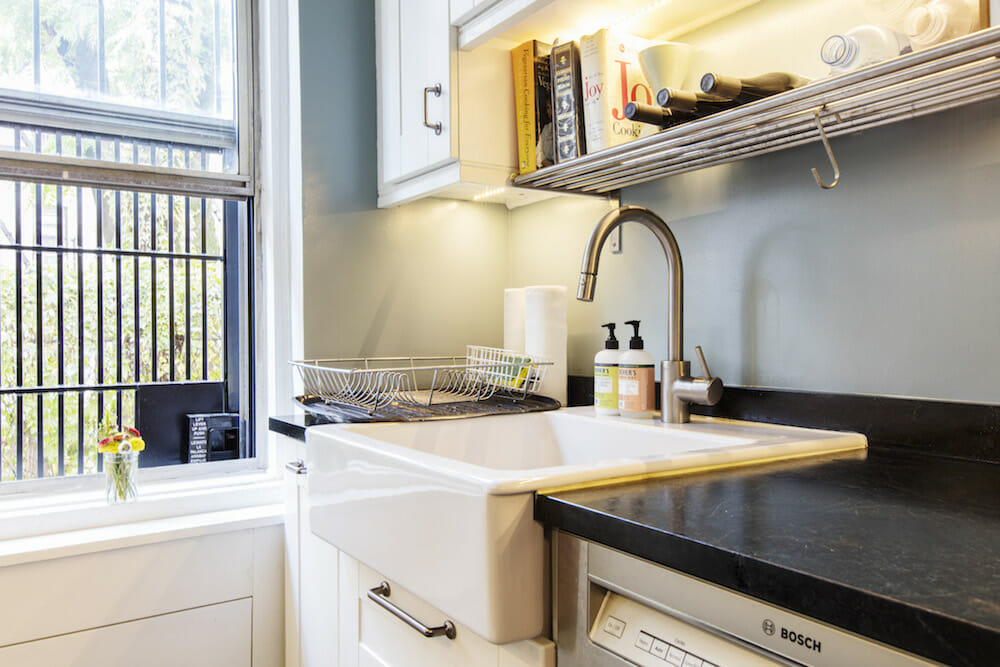 Bonus: This East Village renovation was full of pleasant surprises along the way. When their Sweeten contractor ripped out the dropped ceiling, Susan and Carl had expected to find something that would slow the project down. Instead, no wires, pipes or anything structural was found inside. “Compared to any other [renovation] jobs, nothing significant held us back with this one,” said Susan.

Refer your renovating friends to Sweeten and you’ll both receive a $250 Visa gift card when they sign a contract with a Sweeten general contractor.

Sweeten handpicks the best general contractors to match each project’s location, budget, and scope, helping until project completion. Follow the blog for renovation ideas and inspiration and when you’re ready to renovate, start your renovation on Sweeten.

The post A Hodgepodge of DIY Jobs Gets a Makeover appeared first on Sweeten.

Did you miss our previous article…
https://www.tampa-bay-homes-guide.com/?p=283