Minor Miracles: a contractor who emails and texts 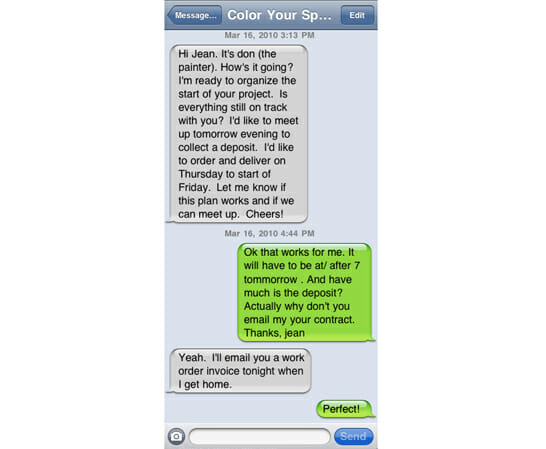 I know for those of you who have not worked with many contractors before, it’s hard to believe me when I tell you this. But a contractor who texts and emails is in fact a miracle. I’m not saying it’s like walking on water, but it is something to appreciate. The vast majority of contractors that I have personally worked with while completing my home preferred to use fax machines or phone calls.

I’ve worked with some great contractors who had never even used a computer. But my life (and most of the people I know) does not include a fax machine, nor will it ever. And yes, I had people tell me it doesn’t matter since we can easily open e-faxes as attachments. I disagree. The very medium is out of touch with the way I think. A fax is a dead end document. I can’t mark it up quickly or revise it without going back to the creator of the document and asking for revisions. My life is more fluid and collaborative than that. It’s much easier to receive an email with a document I can edit if need be.

Usually when my phone rings,  it’s someone I know. It’s someone I want to talk to, and I assume they have something semi-important / important to say. With so many modes of communication, I can  twitter it, fb it, email it, or text it. But the  phone is still the most personal–it has maintained its place of hierarchy in the communication pyramid, with face-to-face being a distant first. The truth is, I don’t need to hear my contractor’s voice. It’s best to text me with issues that need an immediate response. I can get back to you with the answer and we have a record of the decision.

The post Minor Miracles: a contractor who emails and texts appeared first on Sweeten.