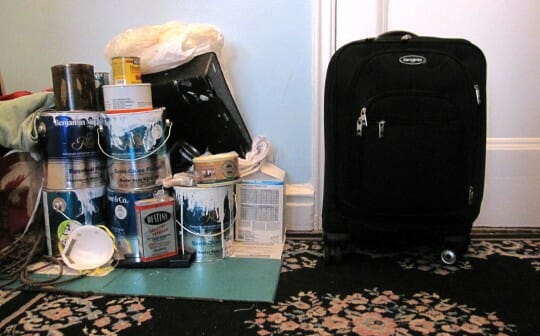 Yet when it came to my own remodel didn’t want to accept that second bit of wisdom. Each of the contractors I interviewed told me that my remodel would take three weeks, and I believed it. In the end it took seven full weeks to complete the construction work. This is through no fault of the contractor’s. There were some surprises during demolition and construction that required extra time to handle.

I was lucky because a number of friends invited me stay at their places while work was being done. And my parents live just an hour outside of New York. I knew that I could stay with them for as long as required and commute into the city each day to monitor construction. At first this “homelessness” was sort of fun, like a series of small vacations. I got to explore different neighborhoods in the city: the Upper West Side, the Lower East Side, Union Square and Park Slope. I spent quality time with friends and a lovely, relaxing week with my parents.

But after two weeks the novelty of being a vagabond wore off. Before beginning demolition the contractors had sealed off my clothes closet with blue tape to prevent dust infiltration, so I was limited to the clothes I had packed in my suitcase. And I had packed very badly, throwing together casual summer clothes in a rolling suitcase. Then the weather turned and I was invited to some more formal parties and I found it impossible to dress properly. I wore paint-splattered jeans to a chi-chi fashion industry event, and flip-flops to a dinner date.

I’m a creature of habit; a disciplined environment helps me to remain focused and productive. This apartment remodel disrupted every aspect of my life, it shook up my routines of sleeping, bathing, dressing, eating and socializing. The resulting sense of displacement, both physical and emotional, was unnerving and entirely unexpected.

Mid-way through the project, after demolition was complete and before finishes and fixtures had been installed, was the most difficult time. At that moment it felt as things would never return to normal, that I would be rolling around that suitcase forever.

The post On The Road appeared first on Sweeten.